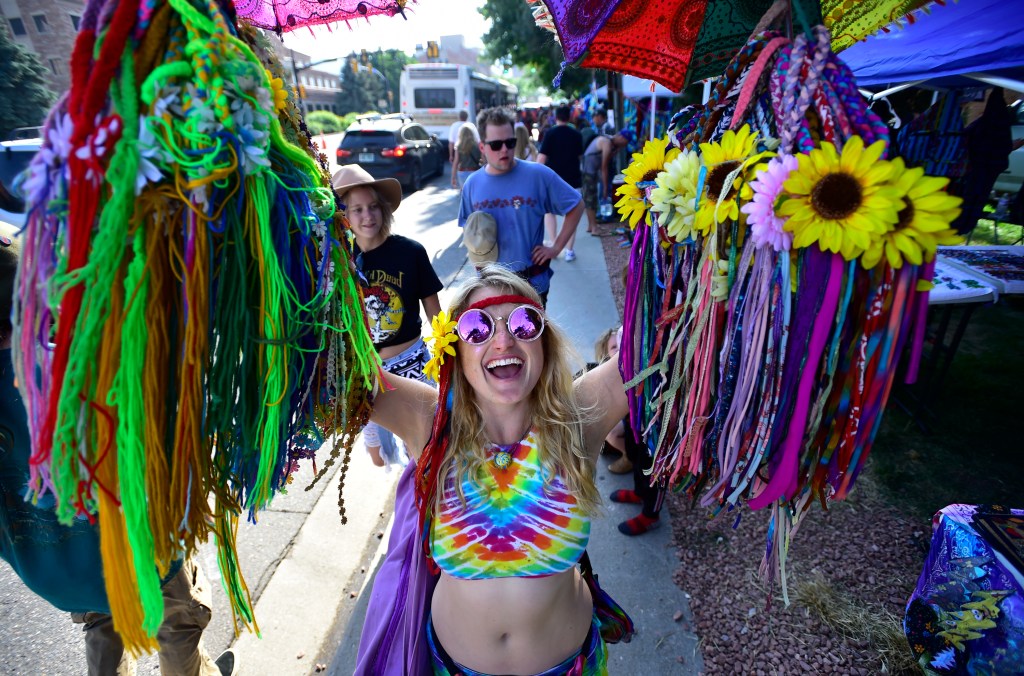 Dead and Company returns to Folsom Field at the University of Colorado Boulder for a pair of weekend shows. Not only does the latest incarnation of The Dead appeal to local die-hard fans living along the Front Range, it attracts thousands of Deadheads from across the country ready to shake their bones.

Just as exciting as the concerts is the scene that arises following the arrival of John Mayer, Bob Weir, Mickey Hart, Bill, Kreutzmann, Oteil Burbridge and Jeff Chimenti.

From vending artists to before and after shows and restaurants offering Grateful Dead-themed specials, the possibilities for choosing how to embrace patchouli-tinged events are vast.

She had rings on her fingers and bells on her shoes

In March 2021, longtime jeweler and music fan Sarah Lewis launched Rose and Bolt — a premium, officially licensed craft line that pays homage to the legacy and influence of the Grateful Dead.

“It was such an honor and an absolute joy to combine my two favorite things – the Grateful Dead and jewelry, into this collection that is so special and close to my heart,” Lewis said. “The sales are great, and I love the fact that through my sales, I give back to this band. This music brought me a lot, inspired me, moved me a lot.

Rumors have swirled about Shakedown Street – the outdoor designer line offering tinctures and glassware, commonly found in lots outside of venues – being banned this year due to restrictions put in place. in place by CU.

The Evergreen-based Creation found ways around this. Lewis and several friends have secured stalls at the Boulder Farmers Market on Saturday, the 13th between Canyon and Arapahoe, where they will sell from 9 a.m. to 4 p.m.

As she connected with customers online during the pandemic, for Lewis there is no greater feeling than the one that arises when she has the opportunity to meet customers in person.

“There’s nothing quite like seeing the smiles on my customers’ faces, shining in my designs, finishing the transaction with a big hug and then dancing together at the show afterwards,” Lewis said.

From “Steal Your Face” pendants with a shimmering abalone shell to “Love is Real” earrings with turquoise and opal, Lewis’ designs are always assembled with the highest quality gemstones.

Lewis grew up going to Dead shows with his parents.

“The Grateful Dead has always been a part of my life, and I can’t remember not knowing the music,” Lewis said. “I remember discovering my parents’ ‘Skeletons In The Closet’ CD as a child and being given tapes of shows from older friends at a young age. These first attracted me, but my favorite albums are “American Beauty” and “Workingman’s Dead”.

His memories of attending Dead gigs with his friends are a little hazy, but an experience in the ’90s solidified his adoration for the band and touring.

“The first show I really remember – which really sparked my love for the Grateful Dead and kind of set me on my own path as a Deadhead – was Further Festival 1996, at SPAC, in Saratoga, NY, when I was 12. Sadly, Jerry (Garcia) just missed, or remembers seeing him at least.

Lewis continues to travel the country, letting live music be his guide.

“Over the years I’ve seen hundreds of shows, from all incarnations, side projects and cover bands, including JGB, Phil & Friends, Ratdog, the Dead, Billy & the Kids, Dark Star and of course Dead & Company,” Lewis said. “I love what John Mayer brings to the band.”

After this weekend’s Boulder shows, Lewis will head to nine more Dead & Company shows where she will be selling. (His full schedule is listed below.)

“Throughout my life, I’ve made so many connections and friendships, and received so much love and support, thanks to the Grateful Dead community,” Lewis said. “The love of this music that we share is such a special bond. And having Rose & Bolt really amplified that because it connected me to so many wonderful new Deadheads.

As the frontman of Crick Wooder, a Grateful Dead tribute band, Shawn Cunnane certainly embraced the catalog of the influential band that emerged from the San Francisco scene in the ’60s.

He will play a pre-show at the new Velvet Elk Lounge Saturday from 2:30 p.m.

“I put on a two-hour, non-stop acoustic loop show with the Grateful Dead — mostly dead tunes with a few other goodies,” Cunnane said.

Tickets are $5 at the door.

“I’m really looking forward to being a part of the incredible energy the city has before the shows,” Cunnane said. “People are coming from all over the country anticipating the setlist. I also hope to see friends from out of town on the west coast come to Boulder.

Fan reunions are extra special, given the COVID-filled times that have cropped up over the past few years.

“The amazing songbook and honest sound sparked my love of the dead,” Cunnane said. “They are the embodiment of Americana. It sounds cliché, but the first time I heard ‘Skull & Roses’ and ‘American Beauty’ I was hooked. The freedom in their improvisation and the depth of the messages in the lyrics is quite a powerful combination.

Cunnane has fond memories of the analog years.

“One of my favorite memories of getting into The Dead was sharing audio tapes with the setlists written on the boxes,” Cunnane said.

After finishing her set at the Velvet Elk Lounge, Cunnane will head to Folsom Field.

“I will be attending the shows with my wife and we are very happy to see Bobby and the gang,” Cunnane said.

While some fans aren’t thrilled to see Mayer sing Garcia’s songs, for Cunnane, it’s all love.

“I think John Mayer is doing an outstanding job. He had to put on shoes that were impossible to fill, and I think he gets way too much criticism. He is super professional, a great singer and a stellar improviser. I have no complaints.

Cunnane has formed strong bonds with other fans.

“The most rewarding aspect of being part of the community of the dead is the people,” Cunnane said. “I’ve been part of this organization all over the country – both coasts and now right in the middle. I’ve made friends and music everywhere because of the Grateful Dead.

The bottle was dusty, but the alcohol was clean

In 1972, the Grateful Dead first performed at Folsom Field. The hill is filled with watering holes where fans can grab a burger or a pint. Business owners are expecting a number of customers over the weekend.

“They are always very festive and well behaved,” said Mark Heinritz, owner of The Sink. “It’s such a big crowd. In terms of impact, it’s one of our biggest weekends of the year.

Additional preparations are being made to accommodate the influx of Deadheads.

“Having been through this a few times, we figured out how to approach the weekend,” Heinritz said. “We are increasing the workforce and inflating our purchases. It’s a beer-loving crowd. We will be extending our hours and offering pizza slices and bar sales after the show.

The Sink plans to serve themed food and drink in honor of Dead and Company’s return to Boulder.

Heinritz is also a huge fan of the band.

“I started my Deadhead a long time ago, seeing my first show in 1980 at the Hartford Coliseum and countless shows since,” Heinritz said. “It has certainly been the soundtrack to my life.”

Throughout the weekend, diners at The Sink can likely hear “Truckin'”, “Sugar Magnolia” and “Uncle John’s Band” coming through the speakers.

“I’m so glad the music lives on and has found a new generation of fans,” Heinritz said. “We can’t hear the music from here, but it will go on regardless.”